An important reason why recurve bows are so popular nowadays is probably because they are particularly comfortable and effective to use due to their specific construction: The limb ends of recurve bows are bent in such a way that they point away from the archer when the bow is relaxed. When the bow is drawn, the recurve shooters achieve higher performance with less strength than in the case of a longbow. Furthermore, you will feel less hand shock after the shot since the string makes contact with the upper part of the limbs and thereby does not spring back as much. Like that, the olympic recurve bows with sight and stabilisers as well as so-called bare bows (bows with no further components) are used in spare-time use as well as in competitions. Find your suitable recurve-sports bow, traditional recurve bow as well as single parts and complete sets for the entire archery experience right away. 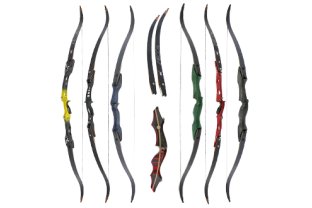 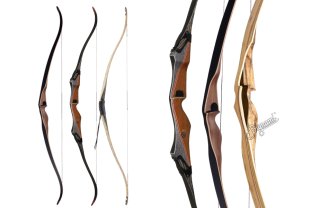 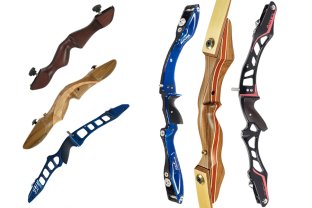 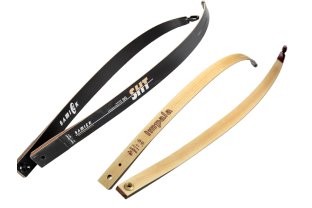 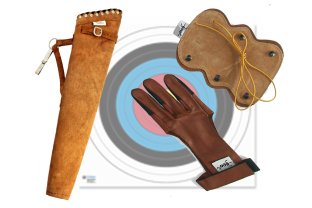 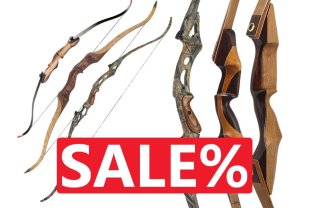 The first recurve bows have already been used in the 7th millenium before Christ and since then, they have been present throughout all of history. Even today, traditional bows, which at least have a part of genuine wood in them or that are kept in appealing and historical looks are built and used. Because of that and for beginners to archery in particular, a recurve bow like the RAGIM Black Buffalo ILF is a great choice. Its riser, which is made from high-quality hardwood does not only look very classy but also has an ergonomic shape and jacks for sights, plunger buttons and stabilisers. On top of that, the Black Buffalo is available in various sizes and draw weights. This recurve bow also is particularly practical due to the fact that it is a take down bow. That means that the riser and the limbs can be taken apart, which makes them easier to transport for example.

Good reasons for a take down recurve bow

Take down recurve bows are also very popular because they make switching the limbs and riser possible: As a beginner in particular, you start with weaker limbs. Your muscles will get stronger with regular training and the draw weight of the limbs will get too light quickly. Then you can exchange the limbs with stronger ones. If you have a one piece bow or a longbow, you have to exchange the entire bow.

Numerous sports bows that are particularly often used in competitions, consist of two limbs and the riser. When manufacturing, high-quality materials such as aluminium, carbon, fiberglass and wooden laminates are used. One of these products is the SF Archery Premium riser for example.

Even if you are already equipped with a recurve bow, BSW will have a lot to offer you. We offer fitting risers and suitable limbs for numerous manufacturers and models. On top of that, our selection includes many sets that you can order together with your new recurve bow. In these sets you can find quivers, arm guards and gloves for archery for example. Modern carbon arrows as well as traditional wooden arrows complete our product range.

There are one piece recurve bows and recurve bows consisting of three pieces, which are called take down bows. In the case of such bows, the bow can be disassembled into the riser (the handle) and two limbs. Bows in the beginner sector most of the time are assembled with screws while higher-quality bows are normally assembled with little pegs. Due to this construction, take down bows can be transported easily and they do not require a lot of space. On top of that they can grow with the archer. Depending on what is needed, some single components can be exchanged in order to adjust the bow length and/or the draw weight, without having to buy an entire new bow.

The feet are slightly offset with approximately 30-40 cm distance between them and in such a way that they roughly form a 90 degree angle with the direction where the arrow will go. (see illustration). In case of left handed shooters this is mirror-inverted. The shoulders and the hip are not turned. Only the head is facing towards the target. You should not lock your feet but stand in a relaxed way.

Drawing and releasing the recurve bow

Take your basic stance. The arrow is put onto the arrow rest and nocked in such a way that the index feather, which has a different colour most of the time, forms a 90 degree angle with the string. The string and arrow are gripped with the index-, middle-, and ring finger. The index finger is placed above the nock and the middle- and ringfinger below the nock. The string rests in the first joint of the fingers. Before pulling the string back, look at the target. The shoulders are retracted. Then, bow and arrow are raised up to the same position as the shoulders. While doing this, the bow is pulled back just a little bit. The arm that holds the bow is called the bow arm and is stretched out. The inner side of the elbow should be rotated outwards to ensure that the string does not make contact with it when it is released. A wrong arm posture can cause abrasions and bruises due to string contact. Because of that, proper protection should always be worn.

We recommend not stretching the bow arm entirely when shooting for the first time. The bow is now raised between your eye and the target. Then, the bow is drawn back using the shoulder muscles, but only so far that the bow hand touches the anchor point. The anchor point is the spot that is touched with the hand everytime you draw the bow, for example the chin or a certain point along the lower jaw. It is essential that this certain point is always exactly the same so that the draw length stays consistent. The bow arm and the arm you pull the string back with form a horizontal line.

Focus on the target. If you use a sight, the sight is positioned between the eye and the target. While doing so, the line of sight is almost horizontal. If you do not use a sight, you aim with the point of the arrow. The line of sight forms a 45 degree angle with the arrow. The bow string and an eventual sight are only seen in a blurry way. You only focus on the target. The tension in the shoulder- and back muscles is kept constant. When the target is aimed at properly, the string is released and the shot executed. For that, the shoulder blades are tightened and the fingers are relaxed. While doing this, the drawing hand moves back a little bit while the string slides out of it. It is important to stay in this position until the arrow impacted in the target. Only then the shot process is fully executed and the entire body is relaxed. This serves for analysing the shot process and possible mistakes can quickly be noticed and corrected.