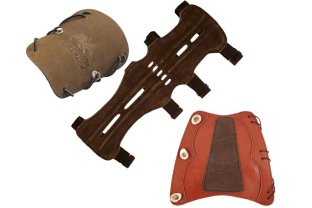 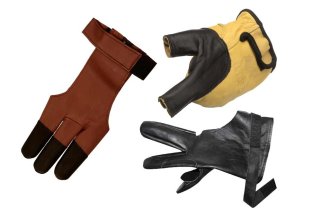 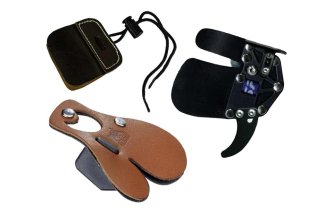 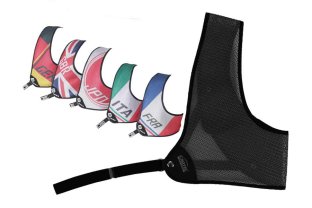 Protective gear in archery is as important as the secure handling of bow and arrow. Without protection, the smallest deviation from the normal shot process can lead to painful injuries.

The danger that the strings slaps the forearm when releasing is always present. This can lead to very painful bruises and abrasions on the forearm. An arm guad prevents this and should always be worn.

There are numerous variations and lengths of arm guards. A short arm guard protects the forearrm, which most of the time is sufficient for experienced archers. But beginning archers in particular do not quite manage to rotate the elbow of the bow arm from where the string goes at times. For them, a longer arm guard is a good choice because of that fact. A long arm guard protects the elbow area as well as the upper arm as well. Depending on the application and the archer´s preferences, he or she can choose between plastic, nylon, leather and artificial leather.


Protection for the fingers - fingertab, glove or release aid

Fingertab, shooting gloves and release aids have one thing in common, despite their many differences: They serve for holding the string in a safe way.

The fingertab is put onto the inner side of the drawing hand. The middle finger is put through the hole. The index finger is kept behind the small loop and middle- and ring finger behind the bigger one.

The finger glove is worn on the drawing hand. Index-, middle and ring finger are put into the finger sleeves. The glove is strapped to the wrist in addition.

Furthermore, there are gloves that are worn on the bow hand and replace the arrow rest for traditional archers. Compound shooters use a release aid instead of tabs or gloves. For recurve archers, this equipment has been banned by all associations. There are various executions but the basic function stays the same: The string is not pulled back with the hand but with a small clamp.

Often, however, the string is not gripped directly but with a loop. This is a small sling that is mounted below and above the nock on the string. For triggering, there is a small lever that needs to be operated in order to release the string. This is the decisive advantage. The string is released a lot faster and more precisely than it would be possible by hand. Less vibrations are transferred onto the arrow when shooting.

The compound shooter has to be very careful with his release aid. If he accidentally operates the trigger when still drawing the bow, the arrow is not only released to early and in an uncontrolled way but the archer will also hít himself in the face with the release and suffer painful injuries.


Do not forget your important chest guard

Other than the name might suggest, the chest guard is not mainly used for protecting the chest from injuries. It is also called brushing protection and keeps the string away from clothing. Loose or thicker clothing is held back. The string bounces off the chest guard and thereby can not get entangled in the clothing when releasing. The arrow flight does not get affected.

The chest guard is worn on the side of the bow hand and is just simply stripped over the clothing. Even though the chest guard mainly serves for improving your results, the protective capabilities should not be underestimated. For female archers in particular, the risk that the chest is hit is large.