What is the spine? It is the amount of stiffness for an arrow. This value is measured by placing a 2 lbs weight on the center of the shaft and then measuring the resulting flex in 1/1000th of an inch. 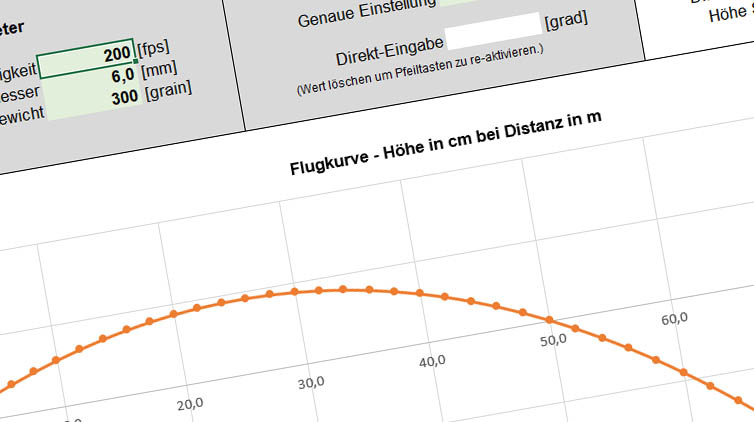 The Arrow trajectory calculator allows you to determine the trajectory and the theoretical range of your arrow. Just enter the required data into the calculator to get a result. (German only)

Video: Determining the trajectory with the arrow trajectory calculator.

The windage depends on the air density, arrow velocity, the cW-value and front surface of the object. It acts opposite to the direction of flight and can be divided into horizontal and verticalcomponents.

The negative acceleration is also dependent on the mass of the arrow due to the windage.

The factor k can be determined by combining all constants

Alternative method: Use of the front surface of the arrow shaft, fletching and all elements at constant cW-value of an arrow-shaped object of about 0.9.

The Excel tool illustrates a complex aerodynamic phenomenon with the arrow flight. Many effects of nature (see sources) cannot be represented. These include:

Aerodynamic properties of an arrow: Influence of point shape on the boundary layer transition