The complicated, very high-tech construction of the compound bow might seem a little intimidating at first glance, but particularly for tech-fans, a compound bow is incredibly fascinating because of this and definately the right choice. As a beginner, it is easy to be overwhelmed by the wide range of bows and accessories, but the modern design and high arrow speed of compound bows are certainly convincing. The Let Off, which is caused by the cams, allows you to safe your power and thereby you can fully focus on your next target.

In order to make your start and the choice, which compound bow fits you the most easier, we have arranged some amazing sets, with which you can start right away. Particularly for beginners, many well-known manufacturers offer great bows that grow with your skill due to their variability. Because of that, the draw length and draw weight can be adjusted easily to your requirements at home without the need of a bow press and even in the case of of rapid improvement of technique and skill you will have a lot of joy with your bow for a long time. Even the term "ready to shoot" can be taken literally when purchasing a bow from us. Just simply order and start right away!

Thomas Sillmann explains:
Our recommendations for an easy start 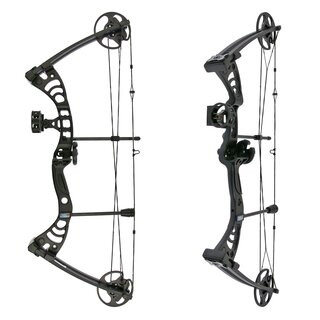 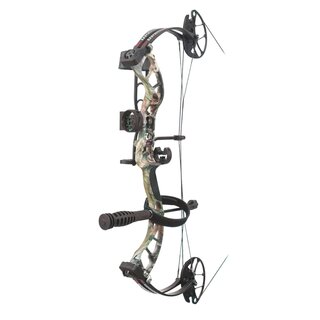 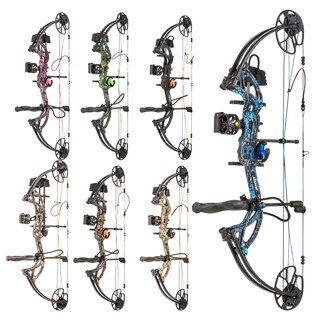 Indeed it takes quite a bit of effort to recognize a sports bow in this high-tech device. Cables, string and cams at the end of the limbs as well as the futuristic design make it difficult to find similarities with what you normally imagine when thinking about typical bows. Due to the fancy looks of compound bows, serious comparisons with bicycles were not long in coming. But once you have devoted yourself with this special kind of bow you will soon get to know the refinements as well as the technical specialties and advantages of the compound bow.

Because of this reason it should come as no surprise that the compound bow started its triumph after the invention in 1966 and is one of the most popular kinds of bows today.

But what is the reason for that? The compound bow looks very unusual. This is already clearly evident when first looking at it. The actual process of convincing its user, however, is accomplished by the special interaction between the components of the compound bow.


What exactly is a compound bow?

Should you have the possibility to hold a compound bow in your hands, you will soon notice the compact way it is built. With a bow length of 30 to 40 inches, the compound bow is only approximately half as large as a typical longbow or sports recurve bow. Apart from the short length you most likely also have noticed the special rolls at the ends of the limbs. These rolls are called cams and have the biggest influence on the special properties of the compound bow.

But before you can experience the superior properties of the compound bow, this kind of bow as well has to be drawn first. Up to this point, there are no significant differences compared to other bows since also the compound bow can only give the energy that has previously been stored in the limbs by pulling the string back to the arrow.

The sudden decrease in draw weight is called Let Off and is indicated in per cent in the technical details of each compound bow. The amount of Let Off normally is between 60 and 80% depending on the bow. That means that the draw weight is reduced by the exact percentage as soon as the Let Off kicks in. Thereby your 60 pound compound bow with a Let Off of 70% only had a draw weight of approximately 18 pounds when fully drawn.

The strongly reduced draw weight when the bow is fully drawn enables you to hold the bow much more calmly and without shaking. Thereby you can fully focus on your technique and and the target you are aiming at. The advantages of compound bows are very obvious. The Let Off and the possibility to mount various components like sights, arrow rests and stabilisers make the bow one of the most precise ones currently.

But which compound bow is the right one for you? The big manufacturers like HOYT, BowTech, PSE and FRED BEAR do everything in order to convince you to purchase from them with their huge amount of products. Amazing designs, performance that continues to grow and new features will not help you decide what you want. Because of that it is extremely important to inform yourself about compound bows, in order to find the most suitable model for you.

You should know in advance, however, what makes a good beginning compound bow good. Aside from a reasonable price and good manufacturing, the bow particularly needs to be very variable. That means, that the compound bow can be adjusted to the requirements of the archer without him knowing, what settings might be perfect for him. Except for a broad range of poundage settings, for example from 5 to 60 pounds, the compound bow should also give the user the possibility to set his draw length from a large range.

In addition to the broad range of settings, you should also make sure that the bow offers a so-called RTS Set. RTS is short for "Ready to Shoot" and tells you that the compound bow is delivered with an extensive accessory set that is matched to the bow. That way, you can start shooting immediately and do not have to worry about purchasing additional accessories and components.

Aside from the popular beginners´set Shadow Rex by STRONGBOW, particularly the Infinite Edge Pro by BowTech, the Stinger Extreme by PSE and the FRED BEAR Cruzer G-2 are in great demand. Very high-quality manufacturing, numerous accessories and a broad range of settings make these models the most popular ones with compound bow beginners that still demand only the highest.


How do you shoot a compound bow?

Maybe you have noticed that a compound shooter often uses a small aid in order to draw his bow. This is because a compound bow is not just drawn directly with the fingers, but with a so-called release. The release is similar to pliers that can be opened with a trigger. Depending on the exact model, the release is either held directly in the hand or is tied around the wrist with a sling.

It does not matter, however, what release you opt for in the end. The basic function is always the same. Before drawing the bow, the release is hooked into the D-Loop. The D-Loop is a small loop that is located in the center of the compound bow´s string. Thereby, the release does not grip the string directly, but the so-called Loop. That way, the hooked-in release cannot accidentally slip and the string is not additionally worn out by the release.

Using a release has multiple advantages. Since compound bows are fairly compact, the string forms a very acute angle when fully drawn. Combined with the quite high draw weight of compound bows, pulling the string back directly with the fingers would be very painful after a while. On top of that, the fingers would give the string a movement to the side when releasing. It is impossible to prevent that. When using a release, this unwanted interference is minimized.


BSW will lead you to your compound bow

Of course we will help you with words and deeds to support you in the process of choosing the suitable compound bow. Apart from an extensive and well-sorted product range for compound bows, BSW offers you custom guidance, which will entirely prevent mispurchases.

In order to find out about your draw- and arrow length, you can watch our youtube video on our channel (english subtitles). You can also learn about additional technical terms in our Compound-ABC and for any further questions about bow and arrow, targets and suitable protective clothing you can contact us by phone (+49 (0)3971 241960) or via our Support Center. That way, you will also be an experienced compound shooter soon!